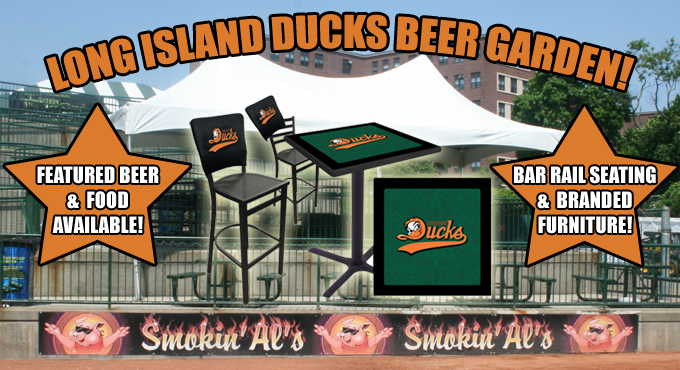 Fans on Long Island will have a new spot to grab some brews this season, as the Long Island Ducks (independent; Atlantic League) are installing a beer garden at Bethpage Ballpark. The announcement was well timed by the Ducks, as today is national beer day.

“We are always looking for new, innovative ways to improve the fan experience at Ducks games,” says Ducks President/GM Michael Pfaff. “The Beer Garden will provide fans a new ballpark option to visit while enjoying a ballgame.”

The Ducks Beer Garden will share the same space as the Smokin’ Al’s Party Deck, which is located adjacent to the playing field along the left field line. On nights where the Party Deck is not rented by a group, it will transform into the Beer Garden and be open for all to experience. To enhance the experience, Seating Solutions, a custom spectator seating company located in Commack (Long Island), N.Y., has added brand new bar rail seating and Ducks branded furniture for fans to use while watching the game. These will help provide a comfortable atmosphere for all in the Beer Garden.

Fans will be able to enjoy draught beers from several popular breweries, including Blue Point – a Long Island favorite – Shock Top, Goose Island and more. Bottled beer will also be available from the Chill Chamber installed in the Beer Garden. Taps are planned to be rotated during the course of the Ducks’ 70-game home schedule. In addition to the beer options available, Centerplate, the official concessions partner of the Ducks, will feature action stations complete with a variety of food choices that can be purchased during the game.

The Beer Garden will make its debut on Opening Night, Thursday, April 28, as the Ducks begin their 17th season of play on Long Island with a 6:35 p.m. game against the Southern Maryland Blue Crabs.