You are here: Home › Regency Furniture Stadium: A Southern Maryland Gem
By Zach Spedden on July 20, 2015 in Independent Baseball, Visits 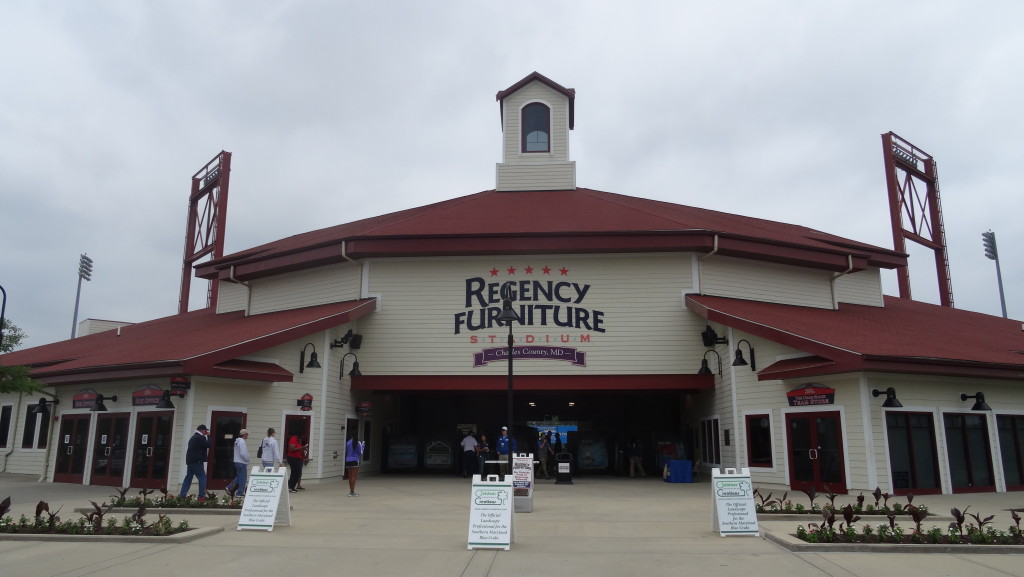 Tucked down in southern Maryland, on the outer edge of the hustle and bustle of the Washington, D.C. metro area, Regency Furniture Stadium is not the easiest place to get to. Once there, however, fans should have a good time at the home of the Southern Maryland Blue Crabs (independent; Atlantic League), which offers one of the finest experiences in a region that is steep with professional baseball.

The effort to bring baseball to Charles County dates back to the mid 1980s, when a ballpark was planned for the Kinston Indians (High A; Carolina League). While preparation began for a new ballpark, the county backed out after a commissioner’s election swung against the facility, stalling the effort for another two decades. In the early 2000s, Opening Day Partners revived the push with plans for a new stadium in Hughesville, but were met with opposition from residents. Despite the setback, it worked out in the end, with ownership striking a deal with Charles County to build a new ballpark in Waldorf in time for the 2008 season. Since the ballpark opened, the Blue Crabs have done a fine job in competing against several more well-established options in the surrounding area, including the Bowie Baysox (Class AA; Eastern League), the Potomac Nationals (High A; Carolina League), the Washington Nationals, and Baltimore Orioles. Part of this owes to Charles County’s rapid population and economic growth as more D.C. commuters move into the area, but the ballpark itself is an absolute gem and the BlueCrabs create a fan-friendly experience.

With an exterior that resembles a barn—an homage to Southern Maryland’s agricultural roots—Regency Furniture Stadium makes an aesthetically pleasing first impression. Once inside, fans will find a spacious 360-degree concourse that offers good sightlines. This includes the berm seating in the outfield, which not only offers a comfortable general admission seating option, but a walkway with adequate standing room. For as nice as the outfield is, it pales in comparison to the seating bowl, which is very nicely designed. At approximately 4,200 seats, it makes for an intimate setting wherein no section feels too far from the field. In addition, it offers comfortable rows and seats, which are angled perfectly towards the field.

Another unique aspect of the seating bowl is the press-box and club-level structure, which resembles the barn design on the exterior. Instead of the traditional layout of putting the press box and suites all in a straight row, Regency Furniture Stadium features a stacked design that includes suites on both floors and the press box at the top. One drawback of this feature is that it limits the shade from elements down both foul lines, but it ensures that every suite has a good view of the action. There is also a restaurant/club area down the left-field line that features outside seats, and is open for events on non-game days. 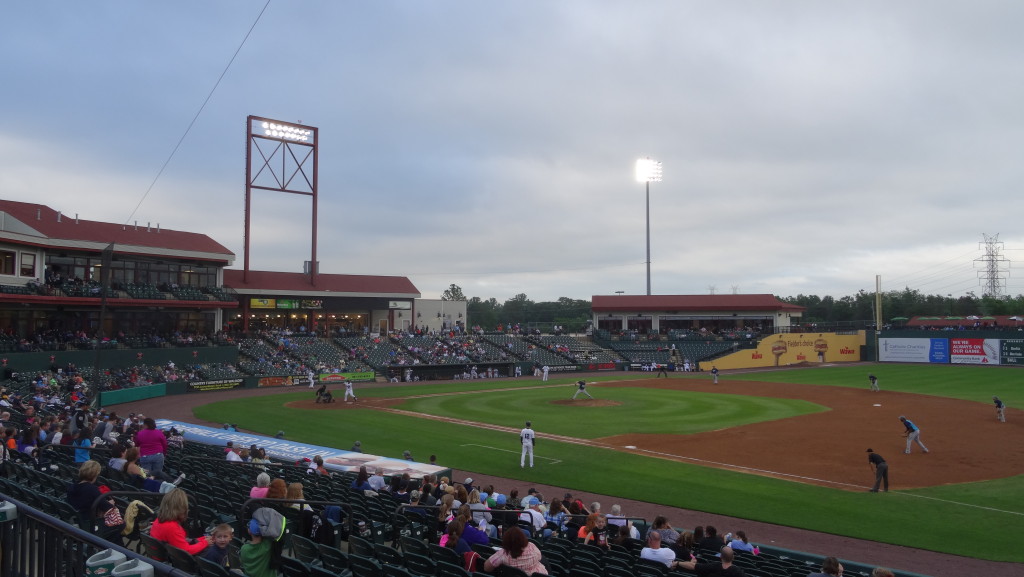 As in other former Opening Day Partners facilities—which include rival Atlantic League stadiums in Lancaster and York, as well as Sugar Land—the amenities are family oriented. Down the right-field line is a large Kids Area that should please the whole family, not only because of the amount of activities, but for the fact that it provides a good view of the field and is well protected from hard hit foul balls. As of this visit, the water bumper pool in left field—which was one of Regency Furniture’s main attractions when it opened—was closed for repairs, but was slated to reopen down the road.

On the concessions side, the team has a Centerplate operation in the main stands that offers standard ballpark fare—such as fries and burgers—along with a Maryland-style crab-cake platter. Turkey Hill (ice cream) and Chick-fil-A also have a presence in the ballpark, but keep in mind that the latter is not open on Sundays. The only notable shortcoming with Regency Furniture Stadium is its location, which is several miles off Route 301, Waldorf’s main roadway. Development has occurred around the ballpark, but has been mostly of the residential variety so any fans looking for something to do either before or after the game will have to drive a good distance. That said, the BlueCrabs do make up for this with an excellent parking situation. Fans can park for free in the stadium’s expansive and paved lot.

When traveling through the Baltimore/Washington area, a visit to Regency Furniture Stadium is a must for any baseball fan. It is a well-designed stadium that features a great game day experience.