More on the rebranding of the Akron RubberDucks (Class AA; Eastern League), as the team unveils home and road uniforms, as well as caps, for the 2014 season.

“I think the new uniforms turned out great and we are excited for our fans to see them. They tell the story of the Akron RubberDucks and highlight the heritage and history of the City of Akron,” said RubberDucks general manager Jim Pfander. Je’Rod Cherry, co-host of the “Hooley and Je’Rod” show from 3-6 p.m. on ESPN Cleveland 850 WKNR and former New England Patriots defensive back, modeled the home white uniform. The jersey features the RubberDucks name across the chest with the iconic tire treads, trimmed in tire black with RubberDucks orange and electric blue highlights. The jersey sports a signature triple piping of the tire black and electric blue around the neck and on each sleeve. The RubberDucks webbed foot and tire tread circular “A” logo appears on the left sleeve and the numerals will be black, trimmed in orange and highlighted in electric blue on the front and back. Additionally, only the home uniforms will feature names on the back, which will be in tire black print. The home uniform pants feature the same triple piping as the jersey down each leg. The home cap is black featuring the primary RubberDucks logo.

The custom gray road uniform was modeled by “Waiting for Next Year” blogger Jacob Rosen. The road uniform features the name “Akron” in bold tire black letters on a white background trimmed in orange and electric blue. There’s electric blue piping along the sleeves and neck that continues down along each pant leg. The numerals are in tire black and trimmed in orange and blue. The left sleeve features the duck with arms logo, which is also the main batting practice cap logo and symbolizes the strength and blue-collar work ethic of Akron’s citizens. The road cap is in electric blue and has the webbed “A” logo encompassed by the circular tire tread mark. Fans will have a chance to see the road uniforms one-night-only at Canal Park on July 5 vs. Bowie Baysox.

Keith Kennedy from Clear Channel Radio and 98.1 WKDD morning host, modeled the batting practice uniform, which is highlighted by an all-black, tight-mesh jersey created specifically for the RubberDucks by Rawlings. It is the only jersey to feature the RubberDucks duck head logo on the left chest and numerals on the right side of the jersey. The hat is a New Era 59-50 fitted mesh black hat with the duck with arms logo. The team will wear either the home or road pants with the batting practice jersey, based on location. The RubberDucks plan on wearing the BP top during seven home games at Canal Park beginning with Sat., April 12 vs. Bowie Baysox.

The fourth uniform unveiled was the official Sunday uniform worn by 1590 WAKR Akron News Now’s Ray Horner. The off-white uniform brings a nostalgic feeling with a modern twist. The alternate tire tread “A” logo is featured on the front chest of the jersey and on the electric blue hat. This mark is made of two black tire treads trimmed on orange and meant to pay homage to Akron’s heritage as the “Rubber Capital of the World.” This is the only uniform regularly worn at home that will feature “Akron” across the front, in tire black letters with orange and electric blue trimming. The jersey and pant legs have electric blue trim and the left sleeve shows the primary duck head logo. The RubberDucks plan to wear this uniform during all but one of the 11 Sunday home games in 2014. Tommy Bruno, general manager of 91.3 The Summit, modeled the electric blue alternate jersey. The RubberDucks are the only team in Minor League Baseball to feature an electric blue jersey, which was designed by Brandiose and produced by Rawlings. It features white piping on the sleeves and around the neck. Like the home jersey, across the front reads “RubberDucks” marked in tire black with orange and electric blue trimming. It is the only jersey with tire black numerals, trimmed with white and electric blue highlights. The primary duck head logo is on the left sleeve. This uniform is paired with either the home or road uniform pants and uses the home black hat. The alternate is scheduled to appear 24 times at Canal Park in 2014, the first time on Fri., April 11, the first Friday Fireworks night. 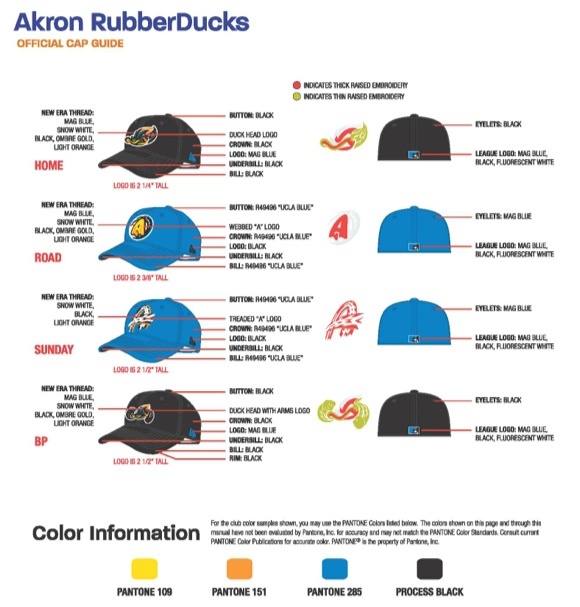 All five uniforms were designed by San Diego-based design company Brandiose, along with input from the Akron RubberDucks management team. Rawlings is the manufacturer and New Era is the official on-and-off field hat maker of Minor League Baseball.