While it lacks some of the frills found at other International League parks, NBT Bank Stadium does the basics pretty well. The entire park has comfortable chair-style seating with ample leg room. No bleachers anywhere. The concourse divides the lower 100 and 200 levels from the suites and general-admission upper level. The concourse also features a row of unobstructed seating. 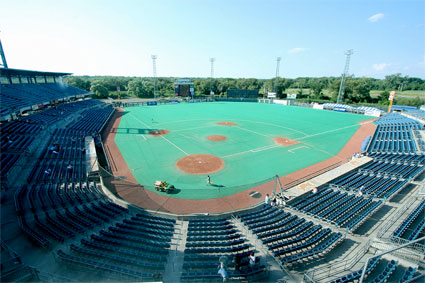 Most fans access the concourse via a flight of stairs behind the home plate side of the park. Elevators are also available through the team offices next to the home plate entrance. If you arrive early to the game, I recommend peeking around the corner from the elevators in the team’s offices. There you’ll find trophy cases with numerous awards and memorabilia and the Syracuse Baseball Wall of Fame, which was established in 1998 in conjunction with the 140th anniversary of the first organized baseball team in Syracuse. NBT Bank Stadium, home of the Syracuse Chiefs.The entire field is visible from the left side of the park; however, the view of the right-field corner from the seats behind home plate and along most of the first-base side is blocked by the seats in the right-field corner area, which are configured to provide a view right down the first-base line. The right-field corner seats also provide a great view of the game. The only problem is on a nice summer night the sun sets over left field, which makes for a lot of potential squinting and sweating until it disappears behind the trees.

The ballpark boasts a large electronic scoreboard just beyond the left-center-field wall and a table-top green manual scoreboard that’s part of the wall in right center between the 408 and 376 marks.

There isn’t too much to do for the kids — none of those fun zones you see at some other parks, but the team’s two mascots, the enigmatic Scootch and train engineer Pops roam the concourse throughout game, and there is plenty of good food to keep them satisfied. CONCESSIONS
The park definitely plays up the local/regional angle with freshly squeezed lemonade, salt potatoes (small boiled skin-on potatoes with salt added to the water to the point of saturation), Syracuse-based Hofmann hotdogs and Byrne Dairy ice cream, and beer from Utica-based Saranac Brewery. Also available is the usual fare, such as hamburgers, pizza, chicken tenders, fries, popcorn and brand-name soda and beer.

I personally recommend the pulled-pork sandwich from the Italian sausage concession stand. The tender BBQ-sauce drenched pulled pork on potato roll was one of the best sandwiches I’ve ever had.

WHERE TO STAY
There are plenty of reliable chain hotels and inns in the Syracuse region.

IN THE AREA
If you like museums, there’s everything from the Erie Canal Museum to the Salt Museum to the Museum of Science and Technology. The Rosamond Gifford Zoo is also a nice way to spend a couple hours before the game. If shopping or movies is more your speed, the always-expanding Carousel Center is within sight the ballpark. The Great New York State Fair is held in late August and runs until the first week of September at the New York State Fairgrounds also in Syracuse.

About 45 minutes west on I-90 is the NY Finger Lakes region, where you’ll find myriad wineries, seasonal festivals, and the Women’s Rights National Historic Park in Seneca Falls.