You are here: Home › Erie SeaWolves mark 20 years with new looks
By Kevin Reichard on February 24, 2014 in Minor-League Baseball, News 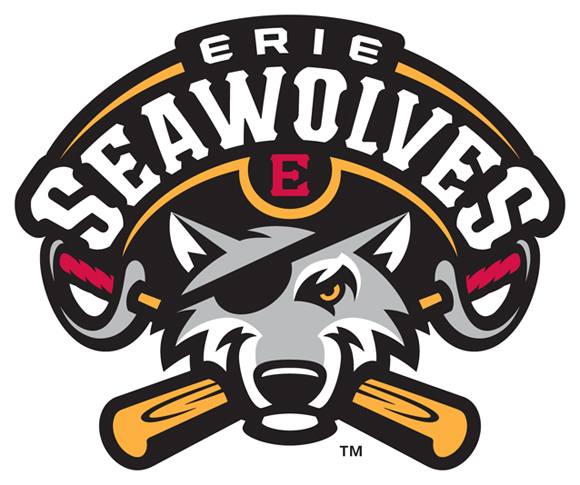 The Erie SeaWolves (Class AA; Eastern League) are marking 20 years of history with a commemorative logo, a new alternate uniform and a series of 20 Seasons promotions.

The season-long initiative will celebrate the fans, players and memories made since the SeaWolves debuted in 1995.

”We are excited to celebrate the 20th season of SeaWolves baseball,” SeaWolves President Greg Coleman said. ”We would like to thank the teams fans and partners for all their support over the past two decades. We look forward to making the upcoming season a celebration of the fans.”

The SeaWolves introduced a commemorative 20 Seasons logo to be featured on fan apparel, promotional giveaways, and a set of on-field jerseys to be worn during the 2014 season. The new logo features an arched SEAWOLVES wordmark, crossed swords piercing through baseballs and a beveled 20 featuring numerals from the teams brand identity system. The 20 Seasons mark was developed by Studio Simon, a Louisville firm whose design credits include the current SeaWolves identity system and logos for two Super Bowls.

In addition to the 20 Seasons mark, the team introduced a new alternate jersey and hat combination. The jersey will be black with the teams home/road cap logo, a pirate wolf wearing a red bandana, on the left chest. The jersey will have red, white and black trim on the sleeves and neckline, red numerals outlined in white on the front and back of each top and the 20 Seasons logo on the left sleeve. The teams new alternate cap is a tri-color, Diamond Era 59FIFTY cap manufactured by New Era. The cap features a red visor, a crown with two white panels in the front and four black panels in the rear. The teams home/road cap logo is embroidered on the white portion of the crown. The new alternate cap and 20 Seasons logo tees are now available for purchase at the SeaWolves Team Store and seawolves.com.