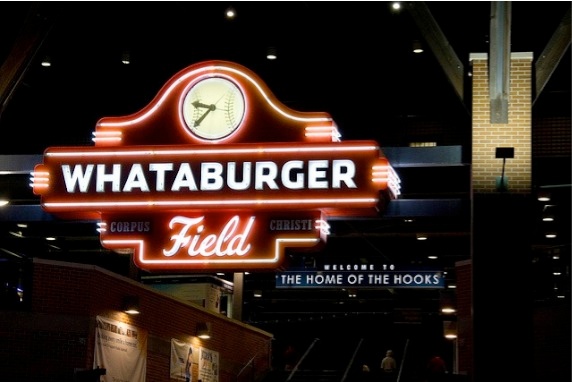 Following the 1998 season, a group led by Nolan Ryan purchased the Double-A Jackson Generals, moving them to Round Rock, Texas, in 2000.  After the 2004 season, the same group acquired the Triple-A Edmonton Trappers. With the newly-named Round Rock Express setting league attendance records and meeting with enormous success, the decision was made to turn the Express into the Triple-A franchise, inheriting the Edmonton Trappers’ spot in the Pacific Coast League. That left open a Double-A slot in Texas League.

Corpus Christi beckoned to the south, Whataburger Field was built, and the Corpus Christi Hooks were born in 2005. A total attendance of 505,189 was recorded that inaugural season, and it’s no wonder why.

From the team website description: “The ballpark was designed to have the “feel” of an old ballpark, hearkening back to an era when the sport was in its golden age. It was also the intent of architects and builders to pay tribute to the cotton industry and the warehouses that previously occupied the site where the stadium now stands. he new facility has the look of an old cotton warehouse and the exterior consists of corrugated steel and bricks.” Alongside the balancing touches of classic baseball and Corpus Christi traditions, Whataburger Field brims with ultramodern amenities: a water park and a splash pad down the first base side, a rock wall for climbing, a basketball court (Sport Court) and a children’s baseball field (the “Stripes Diamond,” which hosts games throughout the summer) beyond the center field wall, and a pool and spa beyond the fence in right-center, all with the U.S.S. Lexington and Harbor Bridge looming in the near distance.

Credit Nolan Ryan, sons Reid and Ryan, and their associates. There is a lot of excitement and energy surrounding Texas baseball right now, from Arlington to Round Rock to Corpus Christi (and this without including the thriving franchises in Frisco, Midland, and San Antonio.)  Still, Corpus Christi has distinguished itself even beyond its peers. The Hooks’ website notes proudly that Whataburger Field has been honored the last two years as Minor League News’ top stadium on the continent.

Considering Whataburger Field’s superb exterior, its outstanding venues, its numerous diversions, and its atmosphere (an average crowd of 5,556 per game during the 2012 season), the question arises: Why can’t this be the true golden age of baseball along Texas’s Gulf Coast?