Talk about an extreme makeover: the baseball experience in Harrisburg is totally different than it was two years ago, and to term the change at Metro Bank Park a renovation is to downplay how dramatically everything at the old Riverside Stadium is different. Metro Bank Park is, basically, a brand-new ballpark with a brand-new-ballpark price tag: $45 million. And every penny of that was money well-spent, as you’ll see in this visit. 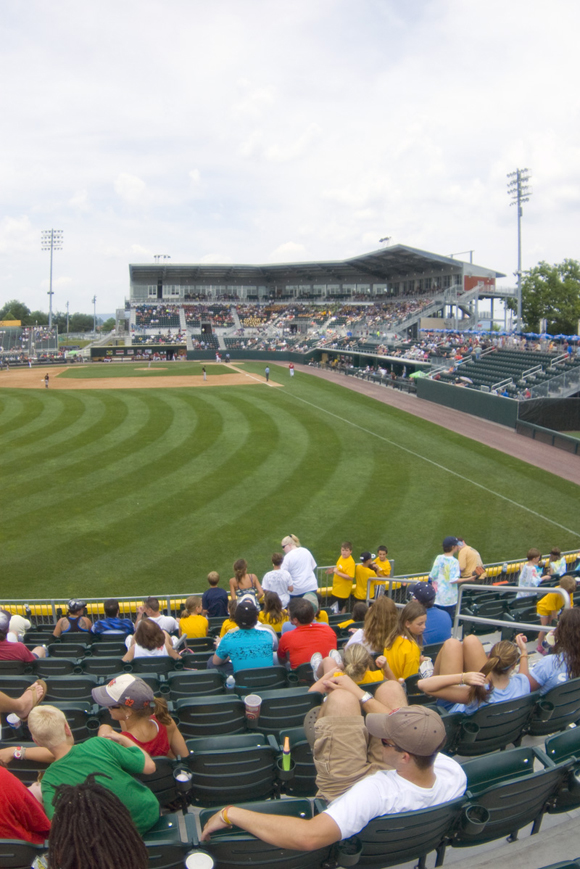 Metro Bank Park is a ballpark where the small things are done very well, where the emphasis is on the fan experience under some fairly constricting circumstances: a small footprint at the ballpark site and the need to basically build a new ballpark while the team played in the old one for two seasons. Both factors represented logistical challenges, to be sure: a decent budget helps, of course, but the Sens, the city and 360 Architecture managed to turn a flood-challenged, slightly uncomfortable ballpark into one of the best in Double-A, if not all of baseball.

There’s a long history of baseball in Pennsylvania’s capital, going way back to the days of the original Interstate Association/Eastern League in 1883 and a Harrisburg entry in that circuit, playing as the Harrisburg Olympics in 1884. Over the years various Harrisburg teams played in the original NY-Penn League (now the Eastern League), but a flood in 1936 wiped out Island Field — a precursor of things to come — and when pro baseball came back to Harrisburg, it did so in the form of Class B Interstate League action until 1952.

The Eastern League returned in 1987 in the form of the Harrisburg Senators, playing at a new Riverside Stadium on City Island Park. Sitting on the Susquehanna River, the park is a popular place for Harrisburg residents to gather. But the ballpark is nothing special, and the city ends up buying the team in 1995. Fast forward to 2007 when the city decides to get out of the baseball business. The Sens are up for bids; Michael Reinsdorf, Cal Ripken and Ivy Walls Management are the finalists to land the team. Reinsdorf offers the most money for the franchise, but at the same time he negotiates city money for a makeover of the ballpark.

That makeover was fully realized this season. One of the best things about the old ballpark was its location: Not many ballparks are located on an island, especially one sitting on a major waterway (in this case, the Susquehanna River).

The rebuilt ballpark takes as much advantage of the location as possible. You don’t get a sense of the river from the actual grandstand because of the necessary orientation of the playing field: the ballpark’s back is really to the river.

Of course, proximity to the river means there’s a chance of flooding; the ballpark has seen games cancelled because of high waters, most recently in 2006. The redesign allowed the city and the Sens to address flooding issues: the concourse (deemed a “boardwalk” by 360 Architecture) is located above where floodwaters have risen, with fan amenities at ground level made portable. In addition, there are now areas that can be sealed off in case of the flood, and the team’s new 8,600-square-foot Operations Building (which includes office space, the team store, box office and concessions) is on higher ground, at the concourse level. This doesn’t mean the Susquehanna River won’t someday make its way back to the ballpark — just that the impact will be lessened. 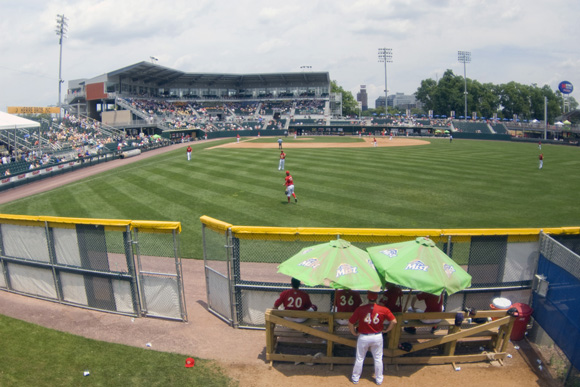 But that didn’t mean that the architects turned their back to the river. The back concourse is open and spacious, and if you’re heading out for concessions during the game you can spend some time looking at the river and downtown Harrisburg; it’s quite a vista. An even better view is possible from the suites one level up: there the suites on the Susquehanna side feature windows in the back, giving you a view of the river from within the suite. It also makes the suites feel a little bigger.

That’s what we mean about all the little things in the ballpark being done well. Most firms treat suites as enclosed spaces to shut out the outside world. In Harrisburg the suites are opened up to great effect.

Another area where attention to detail can be noted: the outfield concourse. Metro Bank Park features a wraparound concourse (mostly; it dips to the ground level in the right-field corner) and manages to do so despite the small footprint of the ballpark: it’s literally hemmed in by three streets, a railroad track and a soccer stadium. Yet there’s plenty of room on the outfield concourse, especially in left field, where there’s also the aforementioned Operations Building.

Making room for the concourse: an outfield seating area – sold to a sponsor as the cheap seats – juts out into the field. Similarly, a group-seating area juts into right field, giving the ballpark an asymmetrical outfield wall.

This is a ballpark where there are lots of places to stand around and watch the game. A bar rail wraps around much of the outfield wall, and these are sold with bar stools as reserved seating. But there’s plenty of room in back of the bar stools to stand and gather, and the left-field concourse is wide open save for a few picnic tables. You can also stand and watch the game from right-center field.

Most fans will want to start the game in the very vertical grandstand, which starts fairly high off the ground and seems to go straight up. That’s OK: a vertical orientation means better views of the field and the action. All the seats in the grandstand are theater-style seats; as a matter of fact, the only seating in the ballpark that’s not a theater-style seat is a set of $5 GA bleachers in right field, a remnant of the old ballpark. (One can imagine those going away someday as well and the concourse ring made complete.) 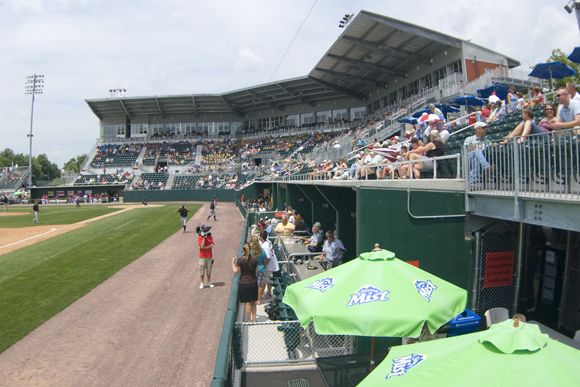 A canopy covers the back of the concourse on a sunny day or evening. The theater-style seating extends all the way down the third-place line. While some sections are deep, most are not; behind home plate there only seven rows of wider seats sold with access to a private club in the concourse. To the rear, on the concourse level, are picnic tables stretching down most of third-base line. Again, these are pretty good seats, and the price is right: $50 for up to eight adults.

One other unusual place to sit: next to the visitors’ dugout on the third-base side is what looks like a second dugout. This is a group area consisting of picnic tables, which rent by the game for $250, complete with beer. Talk about an intimate view of the action. 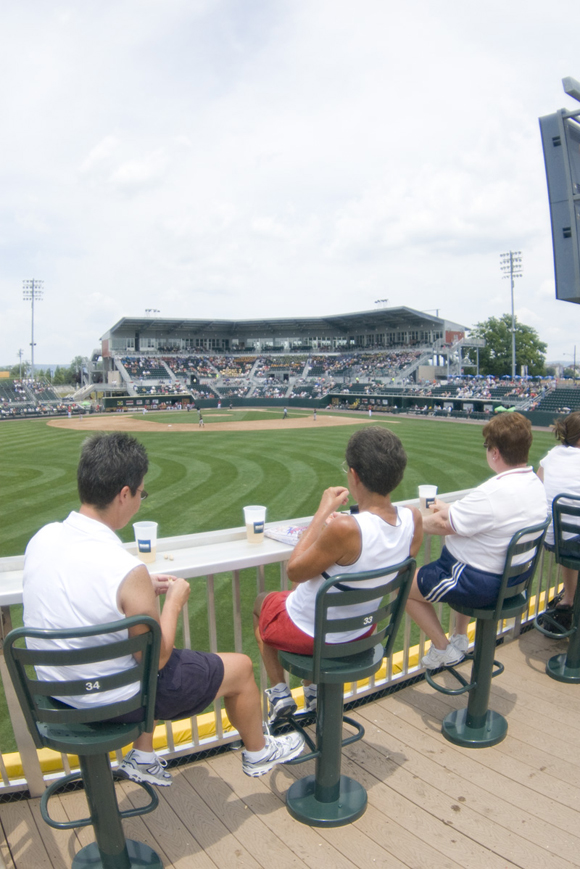 Signage at the ballpark is really at a minimum. Most of the signage needs are filled by the displays: two ribbon scoreboards in the outfield rotate advertising messages, while a large videoboard is right field is framed by ads.

One thing at the ballpark that hasn’t changed: the inevitable mayflies. Even during a hot summer day they’re in action. The mayflies are basically harmless, and the Sens even incorporated a mayfly into some alternate logos some years back.

If you couldn’t tell, we loved the way the new Metro Bank Park turned out. To say it’s a vast improvement over the old place is an understatement: it addressed basic deficiencies in the previous design and added all the amenities fans expect in a modern ballpark — and all of this was done with style. It’s definitely catapulted to the top tier of facilities in Double-A ball and worth a visit if you’re in the area.

CONCESSIONS
New ballparks, of course, offer an abundance of concession opportunities. That’s the same with Metro Bank Park, which features concessions throughout the park. There are clusters of concession stands beneath the first-base bleachers and on the concourse level of the grandstand. In addition, there is an excellent beer stand and standalone booths on the ground level, in back of the grandstand.

For those seeking local beers, you can find Appalachian Brewing Co. and Yuengling brews for $6.25. Appalachian beers are brewed at a downtown brewery, in a building dating back to 1915.

The Spot was a Harrisburg landmark, serving up hot dogs and burgers for almost 70 years before closing in 2007. The Spot lives on at the ballpark in a booth in back of the ballpark. The offerings are unusual to say the least: We tried an Ollie Hot Dog, complete with BBQ sauce, bacon, onion and cheese. It was insanely good, and a relative bargain at $3.75. WHERE TO SIT
With a wraparound concourse and a vertical grandstand, there’s really not a bad new seat in the house, though the old bleachers are, well, bleachers. We’d recommend checking out these seating areas: 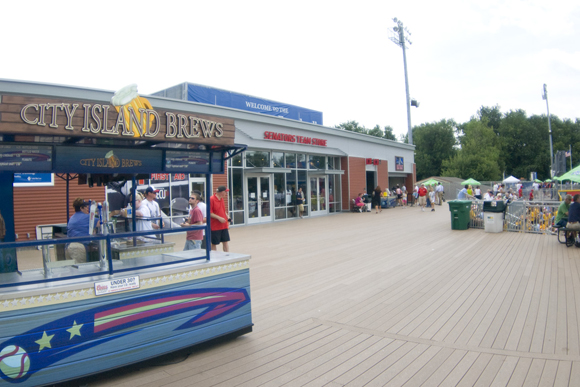 FOR THE KIDS
A kids’ play area is located at the ground level along the third-base concourse. It features the usual bouncy houses and more.

BEFORE/AFTER THE GAME
Take the family and be prepared to spend some time at City Island Park. Besides the ballpark, there is a whole host of attractions there, including mini-golf, swimming beach, carousel, and hose-drawn carriage. The Pride of the Susquehanna Riverboat docks on the island as well.

The city is also home to the once-controversial National Civil War Museum. A pet project of former Mayor Stephen Reed – the man who bought the Sens and later sold them for the city – the museum was decried by many as being inappropriate for the city.